At the Thorncombe show in November I was inspired by a layout called ‘Hounslow Sidings’ which I see is featured in the January edition of the Railway Modeller. This layout is modelled with snow, and talking to the owner, Ray Norwood, he gave me details of a company called Precision Ice and Snow. They produce a snow effect scatter and a liquid that can be applied to represent ice and frost. It seems this is mainly used by military Modellers

Having sent away for some of the product and testing it out on some old models I was very impressed and decided to take the plunge and turn shades of grey into a wintry scene. The whole ship was removed to be done separately and after masking out the water and back scene I sprayed the whole lot from above with hairspray and then sieved the scatter on. I have applied it quite sparingly to give the effect of a light snow shower over a frosty ground. The ship was treated similarly and then replaced in the scene.

By applying it sparingly it is possible to build up a thicker layer by respraying and adding more scatter. Once dry the snow adheres quite well but I need to avoid tipping the layout too much as some loose stuff can collect in ‘drifts’. Car tracks were added by running a vehicle up and down by hand as well as foot tracks by scraping with an orange stick.

Overall with the atmosphere created by LED lighting and the dull grey finish, the application of the snow really adds to the feeling of a horrible, dull winter’s day. 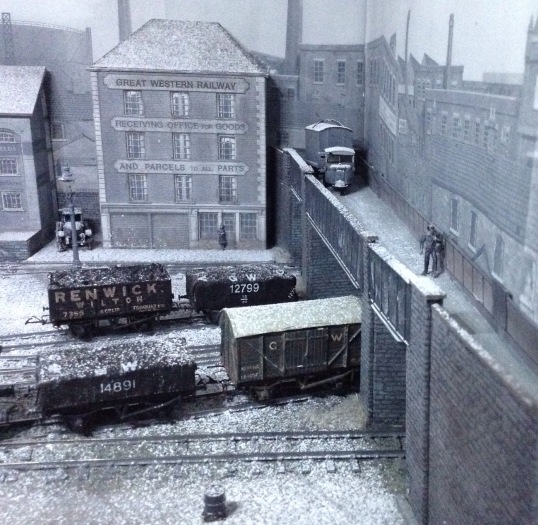 See what you think!

Modelling the Great Western Railway in 1947

Ouse Valley Modeller is a blog about my 4mm OO gauge modelling, my observations mostly about Sussex railways in the 1950's and my layout Herstmonceux

The Model Railways of Oly Turner and Chris Matthews

MODELLING MUSINGS ON PORTCHULLIN, GLENMUTCHKIN AND ANYTHING ELSE THAT TAKES MY FANCY

A record of my P4 layout Kyle of Sutherland, which I scrapped in 2018, and the continuing work to upgrade and improve its finescale trains, locos and rolling stock