Archive for the category “Uncategorized”

I have decided to enter the 50 challenge to celebrate the 50th anniversary of tHe 3mm Society. This is in addition to continuing with Cowleaze Farm (see earlier posts), building extra rolling stock for Yeoton Wharf(see my other blog) and painting and lettering the stock for Lakebank(see earlier posts). Who ever said a male can’t multitask !

For the 50 challenge I have decided to make a small dockside shunting scene 50 cms wide and 50 cms deep. At the front will be a three masted schooner which I am recycling from a China clay wharf I built some time ago.
The layout has not got a name yet but it will be dependent on an experiment I am trying with the painting. More later………

I have transferred this project to my blog on Yeoton Wharf as the locomotive is intended for that layout.

Progress has been made on the hill and banking at the back of the layout. Initially a framework was laid using card formers to produce the contours-‘eggboxing’.

This was then covered in a muslin stuck down using a standard glue gun;

This framework was then covered in strips of green paper towel soaked in and stuck of with diluted PVA. The strips were laid in a criss-cross fashion. Once dry it forms a firm shell on to which the various grass and vegetations can be stuck.

We have also been working on the road surface for the lane going over the plate girder bridge and up the hill.The base is card. This was painted with light earth coloured masonry paint. While still wet polyfilla was sieved onto the paint. When dry the excess was removed and then the surface is built up with washes of dilute acrylic paint. 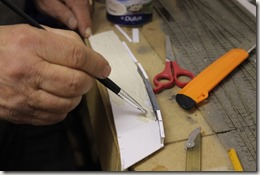 As I have mentioned in previous posts, I have been involved in the construction of a 14.2mm fine scale layout in my local club-the Launceston and District MRC. Over 25 years ago they made a start, under the auspices of Iain Rice on a layout based on the ex Furness Railway in Cumbria. The idea was to demonstrate the appeal of 3mm scale. Unfortunately with the loss of the clubrooms the layout was dismantled but all the buildings and the majority of the track work was retained together with all the stock that was under construction. A few years ago the club moved into new, but smaller, premises, at which point I joined. It was decided to resurrect the 3mm layout but in a smaller form. The plan was drawn by Iain Rice and is shown below; 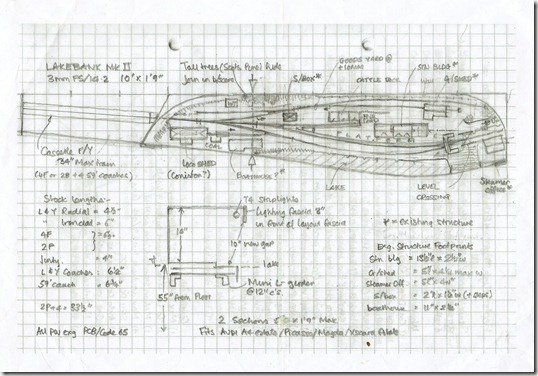 We have been able to use the station buildings, goods shed, signal box and the steamer office from the previous layout. The location is based on the map drawn by Arthur Ransome in his well known book ‘Swallows and Amazons’. The buildings are from stations along the Coniston Branch of the Furness Railway. The engine shed which is under construction will be that which was found at Coniston.

All the track work has been laid and tested and a start has been made on the scenery. Here is an artists impression of what is planned 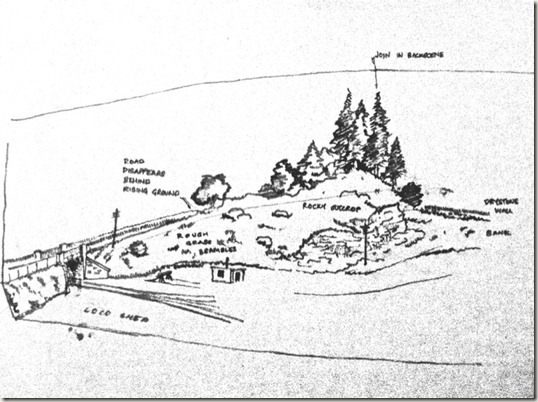 The pictures below shows the state that we have currently reached.

Progress is slow, as is often the case in clubs. Too much talking and drinking tea!!

The garden has been put to bed and the days have shortened so it is time to think about modelling projects.

I am a member of the Launceston and District MRC and we are constructing a 14.2mm gauge layout called Lakebank. This is a re-vamp of a project started over 25 years ago under the auspices of Iain Rice to demonstrate the potential of 3mm scale modelling. When the club had to vacate it’s premises the layout was dismantled but the stock, trackwork and buildings were all retained. The club now has new premises and the layout we are now constructing is smaller than the original but reuses the track, buildings etc. I will write further on this as we progress.

Coupled with the above layout I have started looking at building a LNWR 4-4-0 Precursor from the basis of a Gem kit which I kindly purchased from Ron Shuttleworth of the 3mm society as surplus to his requirements. This is a challenge to me as I have not modelled that company before. The scenery for the layout is also challenging as it is based in the Lake District on the former Furness Railway, an area I don’t know much about and have not modelled in the past!

Finally I have made a start on constructing a cottage for Pendon Museum. More later on this subject.

Welcome to my new blog. You may have come here via my previous blog- Yeoton Wharf in which I detailed the building of a 3mm scale mixed gauge layout which is now on the exhibition circuit and featured in the October 2012 Railway Modeller.

I have started this blog to describe and share other modelling projects that I get involved in. A recent move of house has given me a dedicated modelling room about 19′ x 10′ in which I already have a good sized work bench and my previous exhibition layout. This is Bagborough West, a 3mm scale 7′ Broad Gauge model. I have room for building a 3mm scale, 14.2mm gauge layout as well. This is presently being designed and hopefully will include a continuous run.

Other projects include a cottage I am modelling for Pendon Museum, -more about that later- , a traction engine I have been building on and off for at least 10 years and some work for a layout being built at my local club.

I cannot promise to post that regularly but please come back at times to see what is going on. All comments gratefully received !!

Modelling the Great Western Railway in 1947

Ouse Valley Modeller is a blog about my 4mm OO gauge modelling, my observations mostly about Sussex railways in the 1950's and my layout Herstmonceux

The Model Railways of Oly Turner and Chris Matthews

MODELLING MUSINGS ON PORTCHULLIN, GLENMUTCHKIN AND ANYTHING ELSE THAT TAKES MY FANCY

A record of my P4 layout Kyle of Sutherland, which I scrapped in 2018, and the continuing work to upgrade and improve its finescale trains, locos and rolling stock